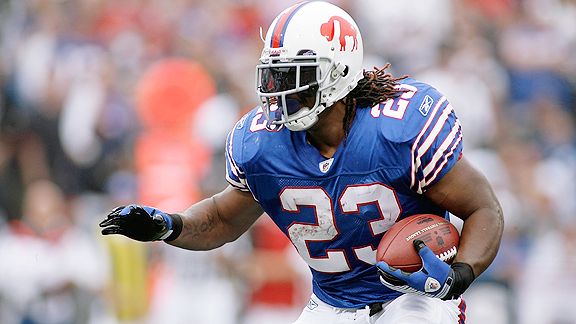 Will Lynch be running out of Buffalo come draft day?

What originally began as speculation now has morphed into reality.  And that reality is Marshawn Lynch likely won’t remain on the Bills roster past the NFL Draft next week.

According to Charles Robinson of Yahoo! Sports, the Bills haven’t openly been shopping Lynch, however, they’ll be listening to offers as the draft rapidly approaches.  The Bills’ asking price  is a second-round pick for the former Pro Bowl back.  Also, my main man from the NationalFootballPost.com Aaron Wilson reports that Lynch is firmly on the trading block.

Robinson stipulates that so far, Buffalo has had no direct talks with other teams regarding possible trades for Lynch, but he directly mentions one team pondering a trade for Lynch: the Seattle Seahawks.  The Seahawks own the 60th overall pick in next week’s draft and with two first-round selections, at the very least it’s a possibility Seattle would entertain parting with its second-round selection.

Robinson points to some factors that could land Lynch in Seattle: Seahawks new head coach Pete Carroll and Lynch were rivals in the Pac-10 when Lynch was a star running back for Cal and Carroll was the head coach at USC.  Seattle’s new regime is searching for a long-term answer in the backfield and it’s uncertain whether or not the current tandem of Julius Jones and Justin Forsett is the solution.  For those still curious, it should no longer come as a surprise to see mock drafts that have the Seahawks taking C.J. Spiller.  Seattle’s looking for an upgrade in the backfield.

Despite putting up consecutive 1,000 yard rushing seasons in 2007 & 2008, along with his first career Pro Bowl selection in 2008, Lynch has hit rock bottom in Buffalo, both with the organization and the fans.  Rumors circulated Lynch was on the trading block when the back didn’t show up to voluntary workouts last month.  Lynch was suspended for the first three games of the 2009 season after pleading guilty to a misdemeanor gun charge.  He has also had several other problems including a hit-and-run guilty plea and a rumored theft of $20 from a Buffalo-area woman.  In 2009, Lynch ultimately lost his starting job to Fred Jackson and posted careers lows in attempts, yards, touchdowns, yards per carry and yards per game.

Now, just because the Bills are asking for a second-rounder for Lynch doesn’t mean their wish is going to be granted.  Based on his character issues and  career low numbers last season, I think the asking price of a second-round pick is a bit steep and probably unrealistic.

My best guess is that maybe some team offers them a third-rounder and the Bills take it, but I still think that’s a reach as well.   Look at what just happened with Santonio Holmes and the Pittsburgh Steelers.  Holmes, like Lynch, has found himself on the wrong side of the law one too many times and despite setting career high marks in receptions (79) and receiving yards (1,248) in 2009 and his Super Bowl MVP, the Steelers jettisoned the problematic Holmes away to the New York Jets for a fifth-round pick.

The Steelers had a strong mindset of washing themselves of Holmes and his numerous character and legal issues, they basically decided to take whatever was offered and be done with him.  Holmes was head and shoulders above Lynch in terms of production in 2009 and fetched just a fifth-rounder.  I’m not so sure a second or even third-rounder is in the cards for the Bills.

It’s still a bit of a cloudy issue if, when or where Lynch will be dealt, but with each day Lynch’s time in Buffalo is fading faster and faster.

Bills appear likely to keep Lynch
Maybin To Be A Camp Casualty?