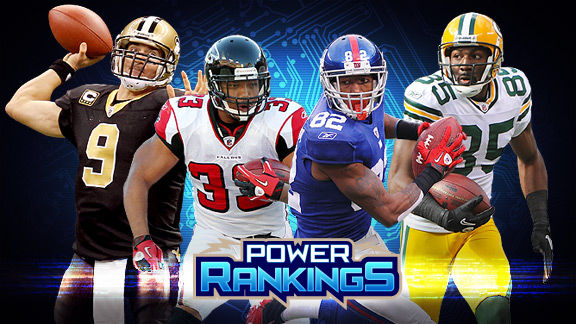 It’s been a head-turning break-neck pace in the NFL over the past two weeks.  But I don’t think there are many football fans who are complaining.  After four and a half months and 136 days without football, cooler and reasonable heads have prevailed and the excitement and anticpation is at a fever pitch.  With training camps well under way and the first preseason opener on the horizon this Friday night, ESPN.com has debuted their 2011 Power Rankings Preseason edition.

Unfortunately, however, (and probably expected) the Bills didn’t receiver any gold stars.   In fact, they fared better in the rankings than just one team.  The voters responsible for putting this all together were a panel of five writers at ESPN.com:  John Clayton, Ashley Fox, Paul Kuharsky, Mike Sando and James Walker.

Buffalo holds down the No.31 ranking, just one spot ahead of the Cincinnati Bengals and one spot behind the Carolina Panthers who had last year’s top overall pick in the draft.  Here’s what John Clayton had to say about the Bills:

“The Bills’ offensive line can’t afford an injury, but it would look better had it added Tyson Clabo.”

I find it tough to argue with Clayton’s sentiment and it’s likely the same sentiment shared by any footballs in-the-know league wide.  With the likes of Cordaro Howard, Mansfield Wrotto, Erik Pears along with rookie Chris Hairston and second-year lineman Ed Wang coupled with still unknown mystery in Demetrius Bell, the Bills could be bracing for a long year along the offensive line.

Looking at the rest of the AFC East, New England and the New York Jets rank inside the top seven while Miami is further down in the mid twenties.  Here’s where they rank and what Clayton had to say about Buffalo’s rivals:

No. 7 – New York Jets : “So far they have replaced Braylon Edwards, Jerricho Cotchery and Brad Smith with only Plaxico Burress and Derrick Mason.”

No. 24 – Miami Dolphins :  “If the Dolphins can’t get Brett Favre to challenge Chad Henne, maybe they can ask Dan Marino.”

-The defending champion Green Bay Packers claim the No.1 spot

-After their wild who’s who free agency additions, the Philadelphia Eagles are No.3

-Six of the top ten teams are from the AFC

–A mainstay near the top of the rankings traditionally, the Indianapolis Colts are No.8

So what does all this mean?  Like mock drafts in the middle of January, ESPN’s compiled preseason Power Rankings means very little, but it doesn’t mean that it’s not worth exploring.  However, if we can take anything away from it, it’s this: the haves rank high and the have-nots are bringing up the rear.  It’s a quarterback driven league and so are these rankings.

Look at the teams in the top in order:  Green Bay, New England, Philadelphia, New Orleans, Pittsburgh, Atlanta, New York Jets, Indianapolis, Baltimore and San Diego.  Each aforementioned team has an established franchise QB or an on-the-rise QB who projects as the  guy.  The same can be said for the 11th and 12th teams in the rankings.  The NY Giants (No.10) have Eli Manning who’s already helped the Giants win a Super Bowl and Tampa Bay (No.12) has Josh Freeman, many believe is the next big thing in the NFL as far as quarterback go, guiding the Buccaneers to 10 wins a season ago.

Now let’s take a look at the bottom 10 teams in the rankings in order:  Oakland, Miami, Minnesota, San Francisco, Denver, Cleveland, Washington, Carolina, Buffalo and Cincinnati.  When you think of those 10 respective teams, you think about teams who have constantly been struggling in their search for a franchise quarterback.

Moral of the story: Porches are better than 10-speed bicycles.